How soldiers power their military devices 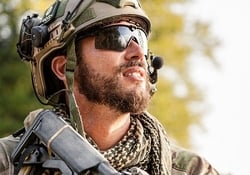 Today's combat soldiers can often carry up to 100 pounds (45kg) of gear, which may need to be carried through the most extreme environmental conditions for up to 48 hours or more.  Here, J.D. DiGiacomandrea, applications engineering manager at military battery specialist Ultralife Corporation, explains the company's pioneering involvement in the US Land Warrior soldier-modernization program and how it led to the development of a high-tech battery that conforms to the shape of the body.

The dense foliage conceals the soldier's movements as he crawls to a vantage point at the top of a grassy mound. As he comes to a rest, he takes in the view below him of a small military camp surrounded by trees. Two guards pass by close to him but remain oblivious to his presence. He is two days into a four-day reconnaissance mission to scout the whereabouts of the training camp located in a tropical jungle deep in enemy territory.

As well as battling the searing heat and high humidity — not to mention the water-logged ground infested with all manner of insects and bugs — the soldier is carrying a plethora of equipment.

In addition to his body armor and binoculars, he is also carrying a wealth of military devices, such as a GPS locator, flashlight and radio. For these last three items he also needs to carry two batteries to power each of them; one plugged into the device and one spare — for emergencies. The problem is that each battery weighs about a kilogram, adding about 6kg of weight that he now wished wasn't digging into his side.

Although this is a fictional story illustrating the severity of the problem that additional weight can pose, the reality is that modern soldiers face war in unpredictable and hostile conditions, where the last thing they need to be bogged down by is their battery pack. 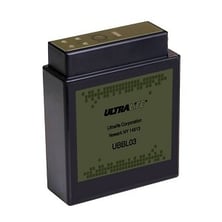 This is why schemes such as the US Land Warrior (LW) Army program sought to address these issues by modernizing soldiers of the future. The program's primary objectives were to improve the soldier's lethality, survivability, and command and communications ability.

This involved an overhaul of subsystems, such as the weapon, helmet, protective clothing, computer, navigation and radio systems to rethink factors including weight reduction.

In the early 2000s, Ultralife Corporation was part of this modernization program and developed the UBBL range of land warrior batteries. These batteries were designed to be rugged, highly energy-dense, rechargeable batteries that reduced overall weight.

Crucially, these batteries used our Smart Circuit technology, which incorporates a communications SMBus that allows the system to accurately measure and display variables such as the state-of-charge, state-of-health, time-to-empty, voltage, current and temperature.

Using these variables, along with a power distribution manager, we were able to develop a universal battery and charger system that could power any device, whether it was a flashlight, radio or GPS computer. This meant that a soldier only ever needed to carry batteries weighing around 2kg rather than those weighing up to 10kg. 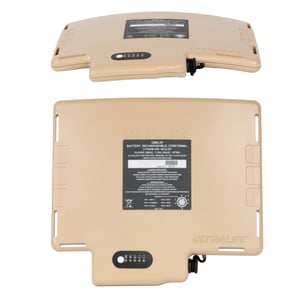 After this program, Ultralife continued to push the limits of battery technology and successfully created the UBBL35 conformal battery. Rather than sitting on the soldier's hip, the battery is placed over the chest-armor and contours to the shape of the body, making it a more comfortable prospect than a straight-edged battery pack that might push against the body.

This means that valuable space is freed up on the soldier's hip, which can be used for easy access to the firearm, and space to add extra water bottles or other equipment that is required more frequently.

So why might military procurement personnel choose one style of battery over the other? While the conformal battery uses the latest cell technology and electronics to make it a reliable battery for years to come, the land warrior still offers a higher energy density and a more competitive price point because it has been in the market for many years.

Also, the curved shape of the UBBL35 was a significant battery design challenge. However, as a specialist in custom battery-housing technology, Ultralife was able to design a sealed battery that can not only be dropped from 26ft high, but one that can still be fully immersed underwater, having been tested at a depth of 1m for 30 minutes.

As modern warfare moves from hot and humid mountainous regions to arid, dry desert conditions, it's important that we continually develop and refine the design, cell technology and thermal management properties of batteries. Equipment manufacturers and military buyers should continue to lighten the burden on soldiers and reassessing the way they power their devices is an important start.