Product development for the soldiers of tomorrow

~ What will soldiers look like in 2028 and how will military tech have changed? ~

The rate of new product development is increasing, and nowhere is this more evident than the government and defense industry.  With modernization programs and increased military spend, there’s a great deal of innovation emerging from the sector.  Here, Jonathan DiGiacomandrea, applications engineering manager for global military battery specialist Ultralife Corporation, explains how technological advancement is reshaping what soldiers will look like in ten years’ time. 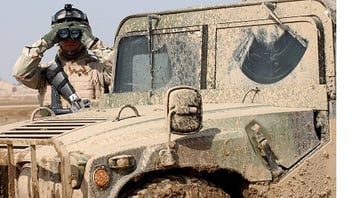 During his first state of the union address in January 2018, US President Donald Trump emphasized the importance of US Congress increasing military spend during his presidency. Citing threats from terrorist groups and rival countries, he stated that, “In confronting these dangers, we know that weakness is the surest path to conflict, and unmatched power is the surest means of our defense”.

The US is not alone in this shift to increased military spend. 2017 saw the European Union (EU) unveil a defense fund, marking the first time that money from the EU’s budget was allocated to defense.  While this may be seen as a worrying reflection of global tensions, it does provide an opportunity for innovations in military technology.

In Ultralife’s years of serving the government and defense industry, we’ve seen the technology change considerably. In the past ten years alone, many military devices have become smaller and more portable for soldiers in the field, while there has also been a significant shift in the battery chemistry powering this equipment.

Around the turn of the century, nickel metal hydride and lead acid chemistries were the industry standard for portable batteries.  In the past decade, this has shifted to lithium chemistries becoming the new norm across military devices — specifically our lithium manganese dioxide (LiMnO2) chemistry, which is currently proving popular for handheld military electronics.

With shrinking devices and changing power supplies having already reshaped the sector over the past ten years and spending steadily increasing, what could a soldier look like in a decade's time?

To determine this, we need look no further than the technology being developed for the special forces, a group that typically leads the sector in terms of technological advancement.  Of this technology, some of the more interesting developments have been in the field of flexible solar and portable wind generation.

Currently, the numerous portable communications devices soldiers use during operations require them to carry an abundance of primary batteries. As devices have become smaller, the aim of many soldier modernization programs has been to minimize the overall weight of items carried by soldiers.

While military battery manufacturers such as Ultralife Corporation have responded to this by developing high-density, lightweight batteries, it will always be the case that two lightweight secondary batteries weigh less than six lightweight primaries. As such, flexible solar power generation provides an on-the-go charging solution for soldiers, allowing them to carry fewer batteries but recharge them easily.

This will mark a shift for the industry.  While we currently supply both primary, non-rechargeable and secondary, rechargeable batteries to government and defense applications, the development of flexible solar technology would see much of the industry move to secondary batteries. 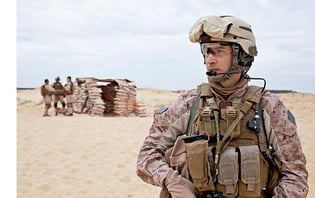 By 2028, it’s likely that portable solar generation technology will have become cost-effective for device manufacturers and, subsequently, become a staple of military technology.

This will allow soldiers to reliably power equipment in the field during long operations, which will become critical as more equipment becomes portable or wearable.

At Ultralife, we’re already developing technology to help this become a reality.  For example, our UBBL35 lightweight conformal military battery is designed to fit closely to the body of a soldier, and we’ve developed a solar military battery charger for it.  This allows soldiers to charge their battery using a deployable 57-watt solar panel while in the field.

With military spend on an upwards curve, the next ten years will be fruitful for defense technology.  As we develop the technology to make soldiers more agile, now is a time of unmatched potential for military devices.

To find out more,