Staying under the 100Wh battery limit

How higher capacity cells allow batteries to be

The energy rating of rechargeable Lithium batteries has a major impact on the way they can be shipped by air, sea, road or rail.  Batteries with an energy rating greater than 100 Watt-hours are subject to more stringent labelling, packaging and paperwork requirements, along with additional training and certification imposed on those personnel offering them for transport.

Many OEMs find the restrictions so limiting for themselves and their customers, in terms of their ability to easily move battery powered products across the globe, that they will go out of their way to ensure their power budget and runtime expectations are consistent with specifying a <100Wh battery.  However, the considerations do not end there as, when manufacturing the next-gen of portable devices, reducing the size and weight of components like the battery can mean obtaining a competitive advantage.  Therefore, it is useful to understand exactly how 100Wh is produced and how selecting the right capacity can help to power the compact devices of tomorrow.

The Watt-hour rating of a cell or battery is calculated by multiplying its nominal voltage (in Volts) by its Capacity (in Ampere Hours).  For example, a Lithium battery with a voltage of 7.2V and a capacity of 2.5Ah has an energy rating of 18Wh.

If we look at the range of Lithium ion smart batteries from Inspired Energy (for which Accutronics are the sole distributor) then all of their batteries have an energy rating <100Wh.  Most Inspired Energy batteries contain ‘18650’ size cells, which – when they were first introduced in the mid-1990s – had a voltage of 3.6V and a capacity of 1.35Ah (4.86Wh), but this capacity quickly grew to 2.2Ah (7.9Wh) as the technology matured.  Around the same time, the 100Wh limit was introduced, so twelve of these 2.2Ah cells could be fitted into a battery pack whilst still remaining under 100Wh (12 cells x 3.6V x 2.2Ah = 95.0Wh).  While 2.2Ah cells are still produced by some manufacturers, the highest capacity cells are now at a staggering 3.4Ah, which represents an energy of 12.24Wh.  Although twelve of these cells could physically be fitted into a battery, it would have an energy rating of 146.9Wh, which exceeds the 100Wh limit.  Instead, only eight cells are needed to stay just under the 100Wh limit at 97.9Wh. 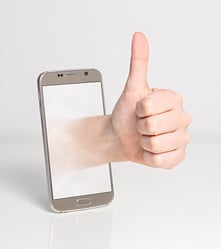 Each individual ‘18650’ size cell that is used by Inspired Energy has a nominal diameter of 18mm and a height of 65mm – so, as a rule of thumb… they are the same size as your thumb.  When eight of these cells are combined to form 100Wh, the dimensions are 18 x 72 x 130mm (roughly the same as a modern smartphone but double the thickness).

The good news is that batteries can now be made smaller (you can now get the same amount of energy with eight cells where you previously needed twelve) and they are also lighter (3.35Ah cells don’t weigh much more than the 2.2Ah models). 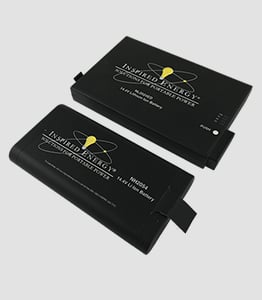 In the Inspired Energy range this is demonstrated by the NL2024ED22 battery; an older model that uses twelve cells in a 4-series, 3-parallel array to provide 14.4V 6.6Ah (95.0Wh).  In contrast, the newer NH2054HD34 uses eight cells in a 4-series, 2 parallel array and provides 14.4V 6.8Ah (98.0Wh).  The newer battery has more energy, is 31% smaller and 33% lighter.  This means that the NL2024 is no longer recommended for new designs, as the NH2054 has a smaller footprint, but it is still manufactured because it has thousands of customers who need it for their installed base of equipment. To breathe new life into the NL2024 platform, there is an even lighter version called the RH2024HD34 where the case is populated with eight 3.4Ah cells.

These days, any battery size and weight reductions are welcomed by OEMs, as they strive to produce next-generation portable devices.  One of the most useful indicators is the gravimetric energy density that defines battery energy in weight (Wh/kg).  This is calculated by multiplying the battery nominal voltage (V) by the battery capacity rating (Ah) and dividing it by the battery weight (Kg).  For example, the NH2057HD34 battery has excellent gravimetric energy density of 225Wh/kg (7.2V x 13.6Ah / 0.435kg).  Plus, at 97.9Wh, its energy rating is among the highest possible under the limit.

The table below shows the highest capacity batteries from Inspired Energy – all remaining under 100Wh:

All of the batteries in the table above are the highest capacity batteries that offer the longest run-time; identified by xx20… in the model / part number (eg ND20… NH20… etc).  In applications that require a long run-time, there is usually a need for remaining capacity to be calculated highly accurately, so the N-Series batteries have a 4 or 5 segment LED or LCD display on the end that gives the user a graphical way of viewing remaining battery capacity.

In some applications, rather than selecting a high capacity battery, the max discharge power capability (in W) could be the preferred performance characteristic.  For example, when small “hot-swappable” power is needed, a back-up battery could be used to keep a device running for a short period while the main battery is changed.  The Inspired Energy product that offers the max discharge power with nominal energy closest to 100Wh (97.2Wh) is the NL2024ED22.

For OEMs that want to stay under the 100Wh limit, cell technology has progressed to allow batteries to be smaller and lighter than in the 90s.  Inspired Energy boasts a range of high capacity products that fall under this limit, which gives OEMs the performance needed to power the next-generation of devices.