Taking video surveillance off the wall

Closed circuit television (CCTV) has been a feature of our world for almost a century now.  First conceived in 1927 by gifted Russian inventor Léon Theremin, it is estimated there are over six million cameras in the UK alone — one for every eleven citizens.  The need for video surveillance for safety and security is clear, but what are you supposed to do when mains power is unavailable?

Just three decades ago, the vast majority of CCTV would have consisted of boxy, rectangular cameras on the outside of a building capturing noisy, low-resolution, low-frame rate footage onto magnetic VHS cassettes.

These security camera systems required power to be supplied to each camera, as well as the recorder.  If there was a power fault without generator backup then everything stopped and, even with backup, some downtime would be suffered whilst the generators started up. 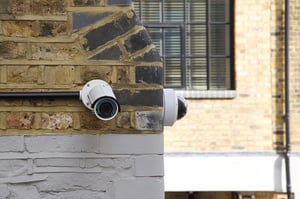 This is clearly not ideal for a variety of safety and security reasons, particularly since one main purpose of video surveillance is to capture video evidence in the case of transgression.  A camera with no power cannot fulfil this function.

The world has moved on somewhat since the 1990s, and CCTV has moved with it.  Cameras have become smaller, better and more efficient.

Meanwhile, the recording devices have upgraded from cassettes of ferric polypropylene tape to video over the internet and terabytes of quantum-mechanic exploiting flash memory.

A major advantage of these developments, besides the far higher resolution that results in higher quality footage, is that the power demands of camera and recording equipment have drastically decreased.  This trend happily marries advancements in battery technology, which have similarly become smaller, better and more efficient over the years.

The upshot here is that battery-powered surveillance has expanded beyond the traditional camera on the side of a property.  For instance, police, paramedics and the fire service now often carry bodycams when on duty.

These small, uniform-mountable devices, referred to as body mounted video (BMV), can record under their own power for at least as long as a shift before needing to be recharged.  Many body cameras have continuous recording battery lives of over 13 hours, through an integral lithium battery pack.

In recent years, most worn body cameras have moved towards using embedded secondary batteries to meet the requirement for long-term use.  However, not just any battery will fit the bill.  Not only does the battery need to offer a high energy density in a compact footprint, it must also provide a lasting, reliable supply of power. 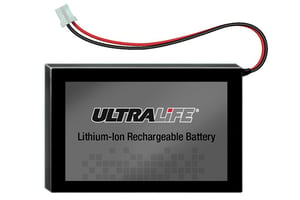 Ultralife’s range of lithium-ion pouch cell batteries are designed to meet all these requirements.  These off-the-shelf batteries occupy a modest footprint of 54mm x 36mm and are lightweight, but still feature a long cycle life, high energy density and an integrated battery management system (BMS) to protect against issues such as short circuiting.

In the event that a design engineer is working on a BMV with replaceable batteries, products like Accutronics’ CC1150 credit card batteries are ideal.  The thin and compact structure makes them easy to design into the heart of a BMV device, making tamper-proofing simple.

Whatever could be next?  Whatever it may be, chances are it will be powered with cutting edge power solutions — and design engineers can be at the forefront by working with specialists like Ultralife.