Hark, how the door bells

In October 2020, the U.S. Postal Service implemented a temporary price increase due to the heightened number of online shopping packages being delivered in the run up to the holidays.  No surprise, as a heady combination of national pandemic restrictions and ever-expanding e-retail dreadnaughts like Amazon are setting us up for a Christmas of video calls and deliveries.  It’s perfect timing then that the smart doorbell has skyrocketed in popularity.

The evolution of the doorbell

The humble doorbell is a simple device.  A bent-metal switch to complete a circuit that powers a bell or chime was all that was needed — until the modern smart doorbell came along in 2013.

Few might have predicted that the doorbell would be one of the first devices to find a place in the Internet of Things (IoT) ecosystem.  But here we are at the end of 2020, with cloud-based recording, infra-red sensing, smartphone-app accessible doorbells that are commonplace outside homes and offices.

These devices, and the accelerating multi-billion pound industry surrounding them, are more than just a novelty however.

Over recent years more and more retail has moved online, and especially in light of a worldwide viral pandemic and national restrictions, ever more barriers to traditional high-street retail are appearing.  This means that, in 2020, many more home deliveries will be made.  Large and small packages galore will be distributed this way throughout Christmas and beyond, meaning thousands of delivery people will be approaching houses and pressing doorbells, often in the dimly lit dusk and dawn as the days close in.

Suddenly, safety and security devices like smart doorbells become quite attractive, and possibly even crucial for the vulnerable and the elderly.  That being said, non-smart doorbells are still a cost-effective option for households that do not require video surveillance.

A major selling point of many doorbells, both smart and non-smart, is a quick, wireless installation.  This makes good sense as nobody wants to spend a cold December day letting heat out of an open front door, drilling holes in brickwork and trailing wires throughout the building.

This requirement puts doorbells in a peculiar place concerning battery power.  The cells must also be hard-wearing and capable of handling both summer and winter temperatures, while also carrying the capacity to last many months between charges.  Additionally, smart doorbells require a battery that can supply a significant current, enough to run the internal logic, wireless alarm triggering, video camera and other smart doorbell features.

Doorbells without video and other advanced functionality do not require high voltage power and can use non-rechargeable cells like the 3-volt CR123A. 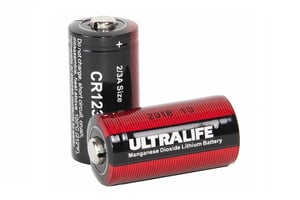 However, not all CR123A cells are created equally.  For example, Ultralife offers its military and medical proven version of Manganese Dioxide Lithium chemistry, which operates at temperatures from -20 to 70 degrees centigrade, meaning it functions perfectly almost anywhere in the world, year-round.

Furthermore, the Ultralife CR123A boasts an extensive standby lifespan thanks to its negligible self-discharge.

Although these cells are perfect for simpler doorbells, doorbells that have video and other features have high power requirements that are draining on the battery.  This means that rechargeable, hot-swappable battery packs that incorporate 18650 sized cells are commonly used.

Ultralife manufactures Lithium-ion Soft Packs, such as the UBBL25, that incorporate these cells.  These cell packs are compact, lightweight and high power, making them perfect for intensive operations like video streaming and recording requirements.  The high-quality wrapping also protects the cells, reducing the risk of damage during handling, replacement or charging.

With the need for home security rapidly expanding and a home delivery-based Christmas just around the corner, doorbells are going to find use like never before.  With the right battery, you can be sure they’ll work for months on end, rain or shine.